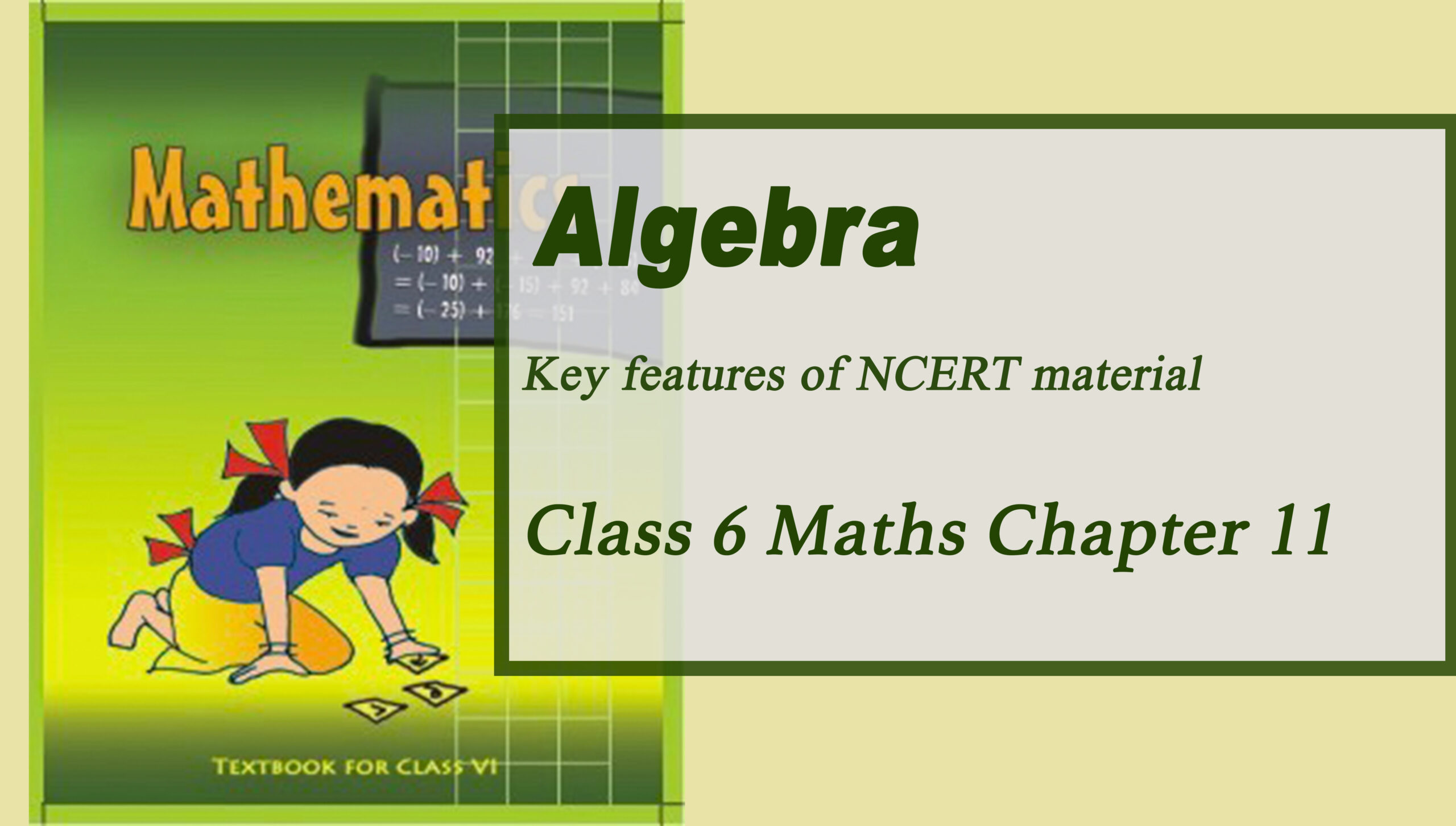 In the previous chapter 10 mensuration, we studied about the perimeter and area of different figures.

In chapter 11 of NCERT class 6 maths: Algebra, We will look at what are variables and constants, application of variables in other branches of mathematics. We’ll also learn what are equations and how to solve them.

In Algebra, there is the use of letters. We substitute letters for numbers to find the unknown. Utilization of letters helps in many ways as follows:

We can make letters and different shapes utilizing matchsticks. We can write an equation between the quantity of matchsticks required for duplicating a given shape. The number of times a given shape is duplicated changes; it takes on values 1, 2, 3,…. It is a variable, signified by some letter n.

The Idea of a Variable

Variable is an unknown quantity that can vary(or change). The value of a variable isn’t constant. It can take various values. For instance, the length of a square can have any value. Hence, it is a variable. But the number of sides of a square has fixed value 4. So, it can’t be termed as a variable. We may utilize any letter n, l, m, p, x, y, z, and so forth to show a variable.

A constant is a known quantity. It has a fixed value. It can be any numerical value.

We can make numerous letters of the alphabets and different shapes from matchsticks. For instance M, L, Triangle, Square, and so forth. In a matchstick pattern, we utilize the variable n to give us the overall rule for the number of matchsticks needed to make a pattern. This is a significant utilization of Variables in Mathematics.

To show a variable, we may utilize any letter as n, m, l, p, x,y, z, and so forth. Review that a variable is a number, which doesn’t have a fixed value. It can take on different values. For instance, the number 10, or the number 100 or some other given number is not a variable. It is a constant because they have fixed values. In the same way, the number of sides of a quadrilateral (4) is fixed; it is likewise not a variable.

Utilization of Variables in Common Rules

Let a and b be two different variables, which can take any numerical value.

Let a and b be two different variables.

Let a, b and c be three different variables.

Let a, b and c be three different variables.

We realize that variables can take various values; they do not have a fixed value. But, they are still numbers. So, as in numbers operations of addition, subtraction, multiplication, and division can also be performed on them. Using various operations, we can form expressions with variables like x – 1, x + 3, 2n, 5m, 3y + 5, 3l – 8, and so on.

Note:  The Expressions of numbers can be quickly assessed.

Yet, the expression containing a variable cannot be solved until the variable has some value.

Numerous statements depicted in ordinary language can be changed to expressions with variables.

An equation is a condition on a variable. It is communicated by saying that expression with a variable is equivalent to a fixed number.

An equation has two different sides, LHS and RHS and between them, is an indication of correspondence (=).

If LHS isn’t equivalent to the RHS, we don’t get an equation.

Note: A statement like 10 – 1 = 9 is known as a numerical equation as neither of its sides contains a variable. As a rule, the word equation is utilized distinctly for equations including at least one variable.

The solution of an Equation

Getting a Solution to the Equation

But, this is certainly not an immediate and useful method of finding a solution. We need less time consuming and a more systematic method for getting a solution to the equation than a trial and error method. In simple equations, the variable is replaced by a placeholder and its value if found out by the usual methods. So, the value of the variable that is received after solving is the solution of the equation.