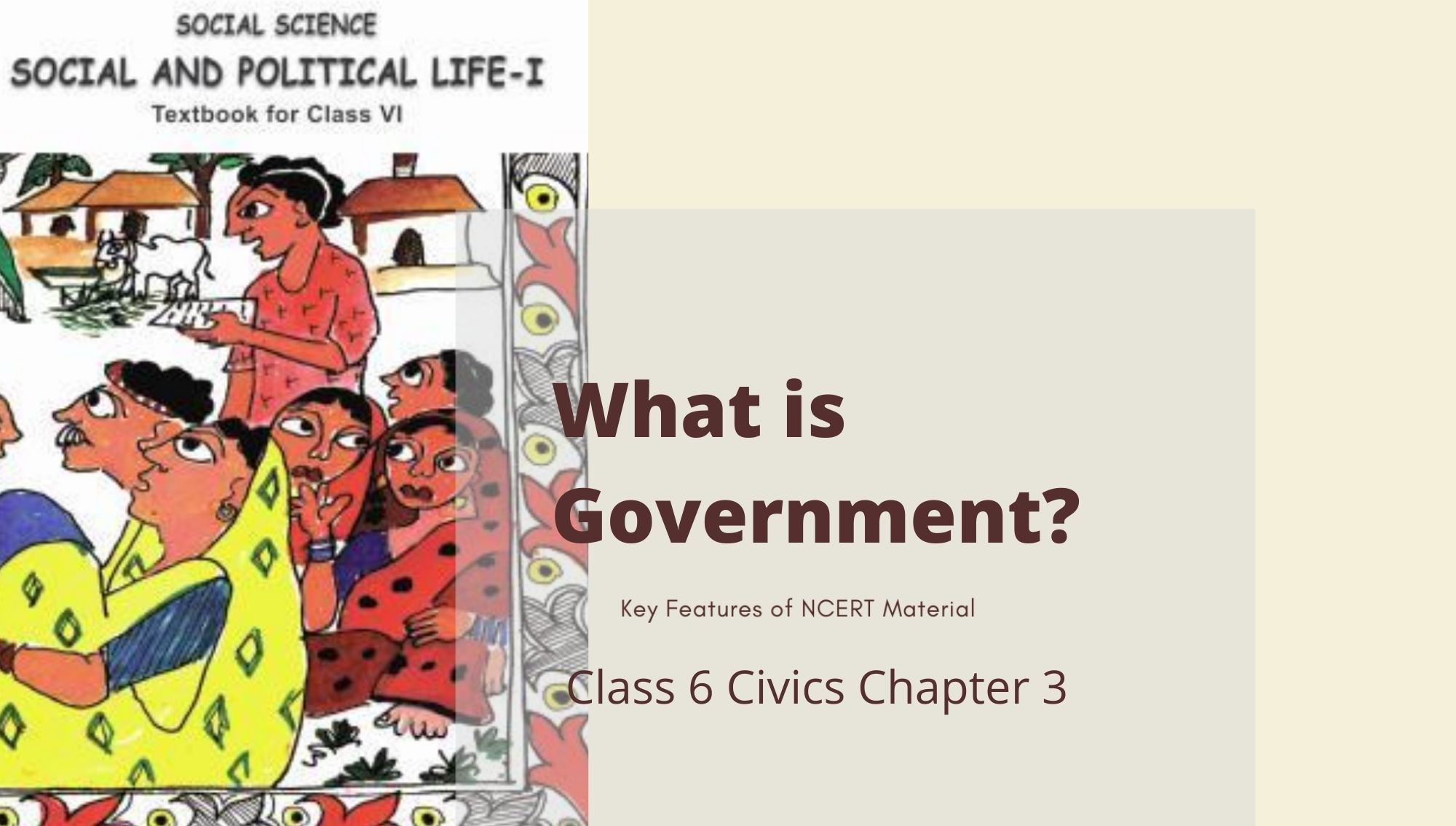 Key Features of NCERT Material for Class 6 Civics Chapter 3 – What is Government?

In previous chapter 2 of class 6 civics, you studied the terms prejudice, stereotype, diversity, and discrimination. You also understood the inequalities that exist in our nation. The government is known as a governing body that makes decisions and works with the motive of the welfare of its citizens. The government offers legal supports to the people to fight any discrimination and injustice and brings peace to keep the society in order.  Further, you will find out more about Government from Class 6 Civics Chapter 3 “What is Government” from the book “Social and Political Life”.

A government could be considered as an asset for every country to take decisions and take action on social problems and things like running postal, and transportation services. The Government is accountable for protecting the geographical and interior boundaries of the country and maintaining good relations with other countries.

When people of a country live and work along, they need an upper hand organization to make systematic ways of running the country. The country must be protected from any exterior or interior misfortune. The government has the power and responsibility to make decisions and make them work by the people of the country. In total, the government works in 3 totally different levels: at the native level (means in your village or city locality), at the extent of the state (covers a complete state like Haryana or Assam), and at the national level (relates to the complete country).

Before Independence, a small population of India had the privilege of voting. Mahatma Gandhiji strongly opposed this decision. He was in denial of this system and supported the universal adult franchise as an advocate which gives all adults the right to vote.

In 1931, he expressed in his journal – ‘Young India’ that it is discriminating to deprive poor and illiterate people of voting rights. Taking away their right to vote just because he is poor or illiterate does not serve justice. A poor or illiterate person is a citizen of the country and holds all the rights and privileges. Thus, Gandhiji believed inequality that could offer equal voting rights to all. Since you know about the fundamental obligations of the government, we should comprehend who makes up the legislature. We as a whole realize that India is an equitable nation. In any case, there are numerous different nations that don’t follow the majority rules system. How about we take a look a their types.

In a democracy, a nation’s kin is engaged with picking its pioneer or head. The individuals are engaged with the way toward framing an administration. They have the unrestrained choice and option to decide in favour of involved with coming into power. The option to cast a ballot isn’t dictated by riches or class or race. In a vote based system, there are various gatherings that have a declaration or a thought regarding how a nation ought to be administered. A vote based government is framed when a larger part of individuals bolster a specific gathering as the decision gathering or force.

Inside a democratic nation, there are a few types of vote based systems, for example, a republic, an established government, a presidential framework, or a parliamentary framework.

An Autocracy or dictatorship is a type of government where the preeminent force or rule is in the hand of one individual or substance. Individuals or outside specialists have nothing to do with the choices of this individual or substance. Totalitarianism incorporates outright government where a family or a gathering of families, otherwise called eminence, rule a nation. The post of the ruler is acquired in a flat out of the government. In this framework, the ruler’s capacity isn’t limited by any laws or enactment. A few instances of supreme government are Saudi Arabia, Brunei, and Oman.

Presently absolutism likewise incorporates fascism. What’s more, there are two kinds of fascism—non-military personnel autocracy and military tyranny. Non-military personnel autocracy is when total force is in the possession of a solitary regular citizen. This regular citizen can be a chosen individual, a ruler, or a despot. The case of tyrants incorporates the celebrated Adolf Hitler, Joseph Stalin, and Mao Zedong.

A military tyranny is shaped when the military assumes responsibility for power in a nation. Also, there might be various reasons why the military holds onto power from the decision party. Now and then, it is shaped with the expectation of sparing individuals from degenerate administration officials.

Additionally, the force isn’t acquired. There are a few sorts of governments, for example, nobility (rule by aristocrats), plutocracy (rule by riches), timocracy (rule by a respectable), and technocracy (rule by specialized specialists or taught individuals).

What is the role of the government to maintain the welfare of its citizens?

The government does the following for the welfare of its citizens: