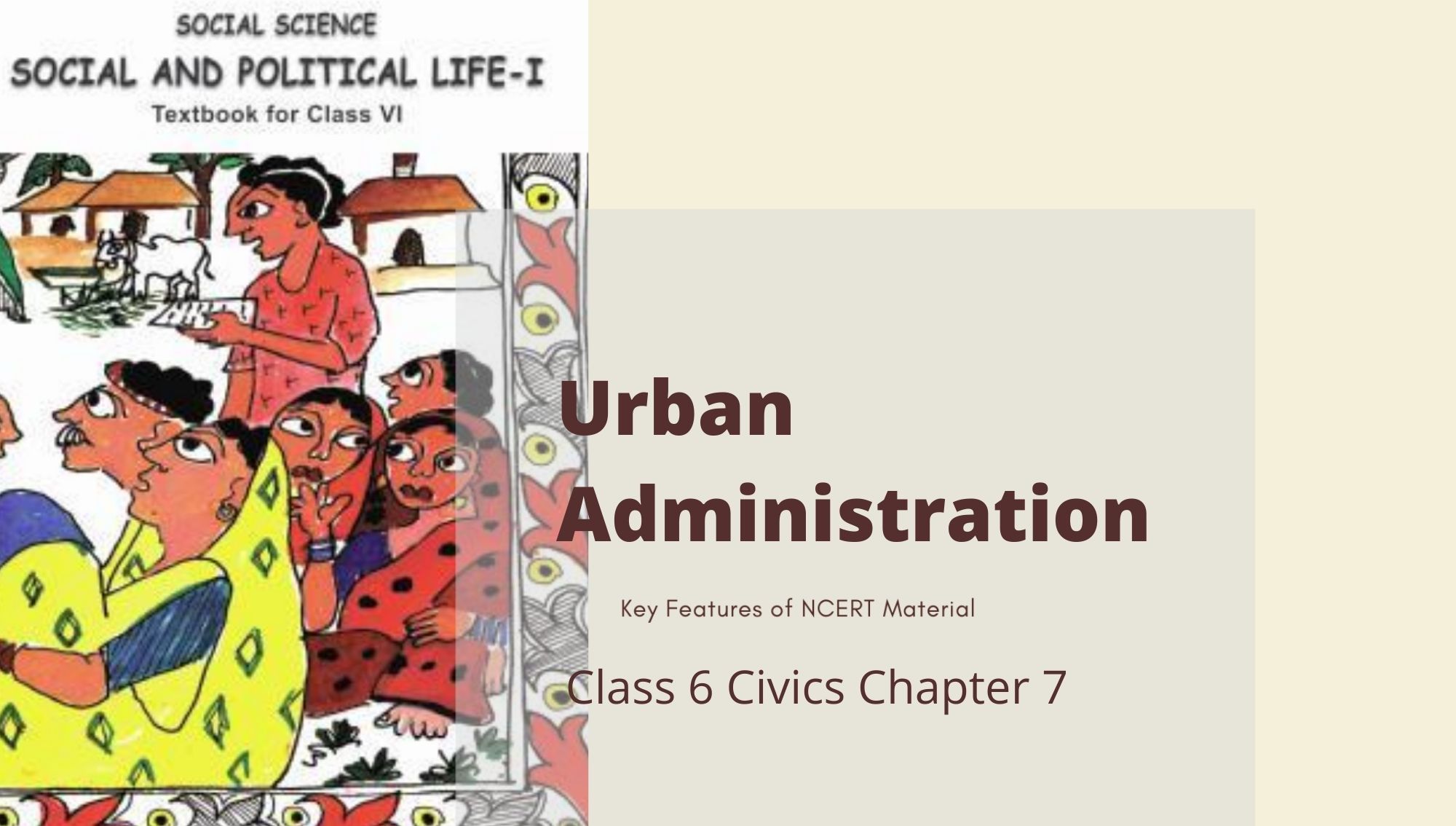 In the previous Chapter 6 of NCERT Class 6 civics: Rural administration, you studied how police ensure well maintenance of the law and order to make sure peace spreads in society. In chapter 7, you will learn how urban administration is important to offer basic amenities like street lights, garbage collection, and water supply. A Municipal Councillor is known to be an elected representative of a ward. It is the authority that takes care of the street lights, maintains garbage collection, public garden, school, hospital and dispensaries preservation, availability of water supply, sanitation, prevention of disease outbreak in the city. In small towns, it is also called a Municipal Council.

The Municipal Corporation is considered as one of the most prominent bodies of the three-tier government system. The all-round development of its designated area including public facilities and welfare work like sanitation, water, road, education, health, etc. These works require funds, therefore, the Municipal Corporation obtains funds from the citizens residing in its corporation area. It relies on taxes from the property, water, and other services.

The Ward Councillor and Administrative Staff

The Municipal Corporation is responsible for all-round development of its designated area and various wards. Issues that may affect the entire city are taken in hand by groups of councillors who form committees to determine and discuss over an issue. When problems occur within the ward people usually contact their councillors. Afterwards, the Councillor’s Committees and the councillors take a decision over the issue the commissioner and administrative staff get appointed to implement them.  In the Ward Councillors meet, a budget is prepared and the money is spent according to the same. It is the duty of the Ward Councillors to ensure that the respective demands of their wards are conveyed to the entire council. The decision for the same is then implemented by the administrative staff who work in the city by dividing different departments within, such as the water department, the garbage collection department, preservation of public gardens, cleanliness and sanitization all over the city, etc.

Nowadays, the Commissioners of several municipalities across the country usually hire private contractors to collect and process garbage in order to collect money. The process is known as Sub-Contracting. In this, the work that was earlier being done by government workers is being done in the hands of a private company or agency.

How would you think Municipal Wards work? They work through individuals called the Municipal Wards Councilors. They are answerable for the urban organization in India and individuals choose them from each ward. Be that as it may, how about we comprehend this with the assistance of a model. In the event that one ward has an issue where the trash is destroyed in the roads, the ward councillor is liable for this.

The individuals can move toward him to get this issue unravelled and can even hold quiet fights to draw this out into the open. Furthermore, issues like rottenness and trash can be host to different issues like spreading of ailment, ruining the feel of the zone, and so forth. Since each ward of the city shapes the city, all in all, numerous councillors some of the time get together, to frame “boards of trustees”. For instance, a messy “Nala” or channel goes through the city and crosses numerous wards. The councillors of the wards concerned get together and discuss and talk about this issue. They can likewise pass a financial plan (a cash plan) that concludes how to go through cash to take care of the issue.

We have perused and found out about the expression “organization” someplace or the other, correct? This is an assemblage of officials that are liable for actualizing arrangements. Individuals choose Councilors and the legislature selects managerial officials. They have to pass serious assessments so as to make sure about the post of these workplaces.

Where does the Municipality get Money from?

Indeed, we have found out about the issues of the city and who tackle these issues. In any case, if the Municipality fixes the road lights, or cleans roads, how can it get the money to do it? The appropriate response here is multifold. To begin with, individuals who remain in urban communities or towns pay “taxes”.

Q: Describe the Junctions of the Ward Councillor and the Administrative staff.

Answer: The Ward Councillors are elected members, responsible for the welfare of the people of their wards by listening and solving their problems. At times, they take complicated decisions that might involve affecting the entire city. At that time, groups of councillors form committees gather together to decide and debate over issues. The Commissioner and the administrative staff further take action on these decisions.