In the last chapter 11, We studied variables, constants, equations and their applications. We also looked at methods to solve an equation. In chapter 12 of Class 6 Maths NCERT book: Ratio And Proportion, we will learn about ratios, comparison of amounts using ratios, proportions and how to solve problems using the unitary method.

There are two distinct methods of assessment:

The (ii) way is prefered more.

The correlation got through division is called ratio. Thus, we see how often one amount is to the other amount.

If we take a look at the two amounts with respect to ‘how often’, the comparison is known as the Ratio. They are the mathematical numbers used to compare two things which are similar to each other in terms of units. 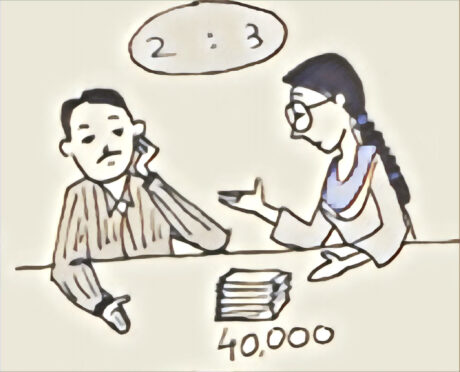 The ratio is demonstrated by ‘:’

A similar ratio may occur in different conditions.

A ratio may be treated as a division.

The order in which the amounts are considered is important. Note that the ratio 2 : 3 is not in relation to 3: 2.

Amounts can be compared with utilizing ratios.

Ratios are said to be in proportion when they are equal and we use ‘::’ to equate the ratios.

When the ratios are not equivalent we state that they are not in proportion.