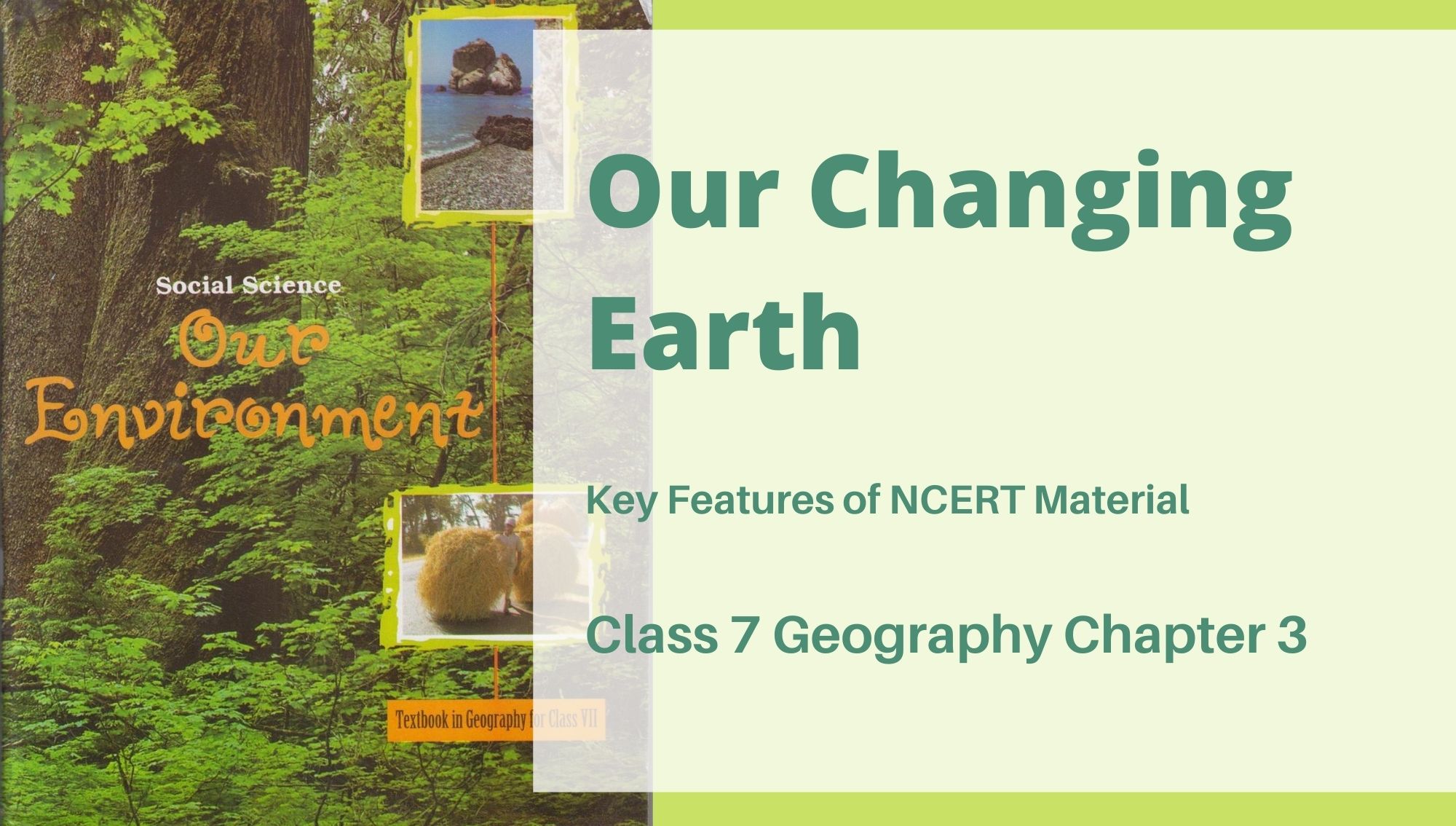 In the previous chapter 2 We studied what is inside our earth and what the different rocks and minerals inside the surface of the earth. In this chapter of NCERT class 7 Geography: Our changing earth, we will understand the earth movements, Different forces associated with it and how it causes volcanos and earthquakes.

The lithosphere is separated into various plates known as the Lithosphere plates.

Breaking of rocks on the earth’s crust is known as weathering.

Erosion is the breaking of the land by various agents like water, wind and ice.

Abrupt movements like earthquakes and volcanoes cause most demolition over the earth’s surface.

A volcano is a vent (opening) in the earth’s crust through which molten lava erupts abruptly.

An earthquake is a vibration in the plates of the earth.

The place in the crust where the movement begins is known as the focus.

The place on a surface level over the focus is known as the epicentre.

Some basic quake forecast strategies incorporate observing and studying creature behaviour, snakes come to the surface, fishes in the lakes get agitated.

During an earthquake, one can take cover under a kitchen counter, table or work area, against an inside corner or wall. One ought to be away from fireplaces, regions around fires, windows, and so forth.

Although earthquakes can’t be anticipated, the effect can be limited.

Work of a River

Raised banks of the rivers are Levees.

The streams which disseminate the waters of a river are known as distributaries.

The triangular deposits at the mouth of a river from the delta, which is extremely fertile.

The erosion and deposition of the sea waves offer ascent to coastal landforms.

Because of the erosional work of sea waves hollow like caves are formed on the rocks. Such formations are called sea waves. At the point when the cavities become enormous, just the top of the caves remains, forming sea arches.

This rooftop once in a while breaks because of erosion and therefore just walls are left. These walls-like features are called stacks.

The sea waves deposit sediments along the shores resulting in the formation of beaches.

The landscape is eroded because of glaciers which are basically rivers of ice. The material carried by the glacier, for example, sand, rocks and slits gets deposited and shapes glacier moraines. The forces that act in the interior of the earth are known as endogenic forces.

The forces that act on the earth’s surface are called exogenic forces.

Earthquakes are the vibrations caused by the movement of the lithospheric plates.

The place in the crust where the movement begins is known as the focus.

The place on the surface over the focus is known as the epicentre.

The breaking up of the rocks on the surface of the earth is called weathering.

The wearing away of the landscape by different agents like wind, water and ice is known as erosion.

A place where a river or stream falls from a high place for instance over a cliff or rock is known as waterfall.

Large bends formed by the twisting and turning of a river while entering a plain are called meanders.

Floodplains are regions where fine soil and different other material get deposited during floods. These are extremely fertile.

The raised banks of a river are called levees.

As the river moves towards the sea, the speed of the flowing water descends and the river starts to break up into a number of streams known as distributaries.

It is a triangular area of land where a river has split into many smaller rivers before entering the sea is known as delta.

Hollow caves formed on the rocks.

When the cavities become huge, only the roof of the caves remains called sea arches.

Further erosion breaks the roof and only wall-like are left. Which are called stacks.

Deposition of sediments along the shores by sea waves results in the formation of beaches.

In deserts, rocks shaped like a mushroom are very common. These are known as mushroom rocks.

In deserts, when the winds stop blowing, the sand falls and gets deposited in low hill-like structures called sand dunes.

When very fine and light grains of sand get deposited in big areas, it is known as loess.